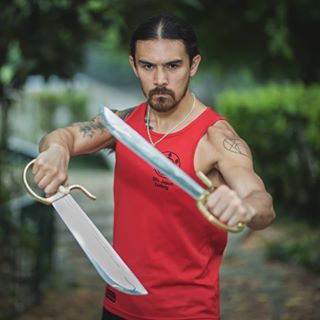 Hi, my name is Jason Ludwig and I’m the head instructor at WCKUK South Norwood, Coulsdon and surrounding areas. I started training martial arts in 1992 under a system called Wing Tai Chun, which consisted of my Dad's experience in Wing Chun Kuen and western boxing, and his masters formidable expertise in Tai Chi Chuan and various other styles. I also trained privately under some other well known Wing Chun Instructors and competition fighters of various martial backgrounds. During my time as a Senior Non-Commissioned Officer for Whitgift School Combined Cadet Force, my Dad and I started teaching Wing Tai Chun to cadets.

This included annual demonstrations to pupils, teachers and high ranking officers in the British Army. To compliment my training I also competed in gymnastics. After secondary school, I took a short break to start a career in music (which I still do today), and eventually restarted my training in 2007 under the Wing Tsun system, and teaching it at a very basic level to kids and adults part-time. This lead me to finding The WCK UK Organisation, which I have been training under since 2010, and became a WCKUK Certified Instructor in 2014.

I also work in feature films and television as an actor, fight performer and musician, and have worked on 47 Ronin, Jack Ryan, Pan, Star Wars: The Force Awakens, Electric Dreams, Aladdin and most notably in Kick Ass 2 as a stunt performer. Some of my earliest memories in life are training martial arts, specifically, Wing Chun, having been raised into it from the age of 4 it is not only my greatest passion but also my main career, teaching and training an average of 30 hours a week.

With the continually growing popularity of this great system, it became more important to train the most effective Wing Chun available in the south of England, and to train the Wing Chun which makes the most sense to me - I have found this with the WCK UK Organisation.

I hope to see you in one of my classes soon! 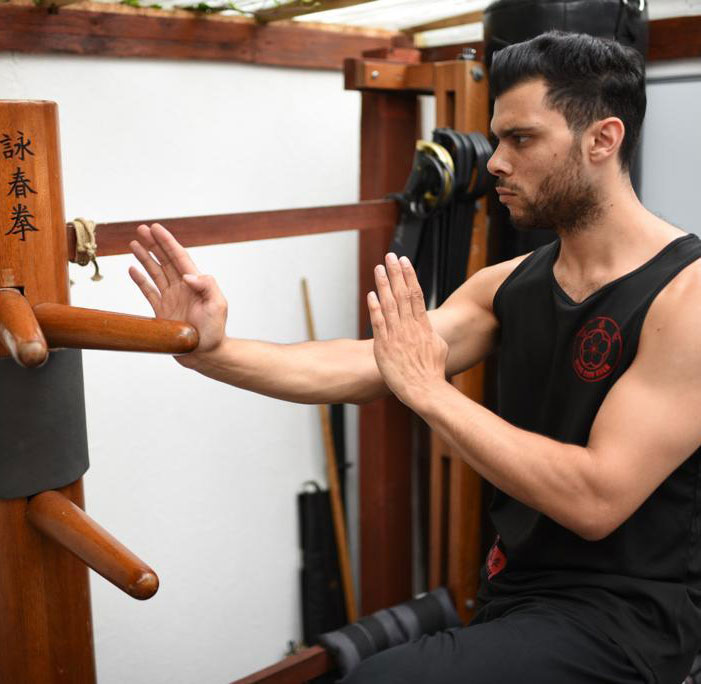 Martial arts was introduced to me from a young age, through my father and a catalogue of various videotapes and books I grew up watching and reading. As a child I tried Karate and Taekwondo, but neither styles felt right in the martial journey I wanted to take. That was until around 5 years ago when I decided to find a Sifu of Wing Chun.

After visiting numerous schools of various lineages around the UK, I found WCKUK South Norwood held by Sifu Jason Ludwig.

My first lesson with Sifu Jason just ‘clicked’ and I knew I had found the right place for me. I have now been training & studying for a few years between South Norwood, Coulsdon and Purley, averaging up to 6hrs a week in private lessons from Sifu Jason, as well as attending all the WCKUK inter-club seminars throughout the year. This lead me to become an assistant instructor in the South Norwood, Coulsdon and Purley adults & children's classes, which I have been doing for nearly 2 years.

In mid-2018, I attained my 2nd Technician Grade testing under Sifu Wes Hussey, Founder and Chief Instructor of WCKUK. I am now working towards my 3rd Technician Grade, and it was at this time that I felt the time was right to take the next step in my teaching journey and open my own school with students of my own.

I am very proud & honored to be a part of such a highly skilled and humble instructor team here at WCKUK. 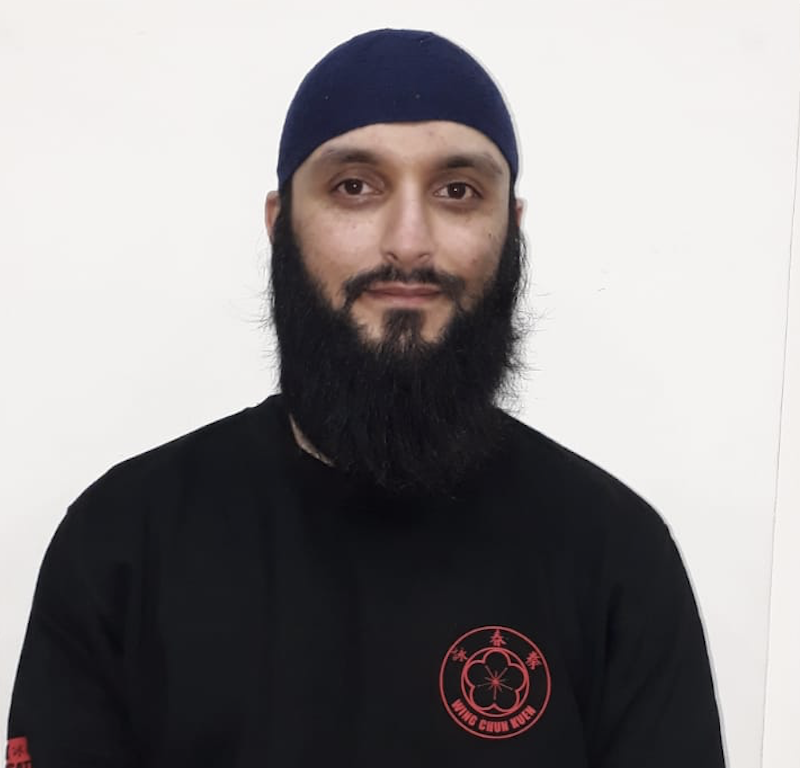 My Wing Chun journey started over ten years ago, where I met Sifu Jason and other instructors. Wing Chun's focus on efficiency, economy of movement and simplicity make it ideal for anyone.

Sifu Jason shares with his students the finer details and concepts which make a lot of difference to your training. I personally have noticed a lot of improvement in my own ability, having learnt from him both in class and in private sessions. It is a huge privilege to be a WCKUK Assistant Instructor which is possibly one of the best places to learn Wing Chun.

I find it rewarding knowing that students are using their time constructively, learning to defend themselves as well as improving self-discipline. I look forward to both developing my skills as well as helping others on their martial arts journey. 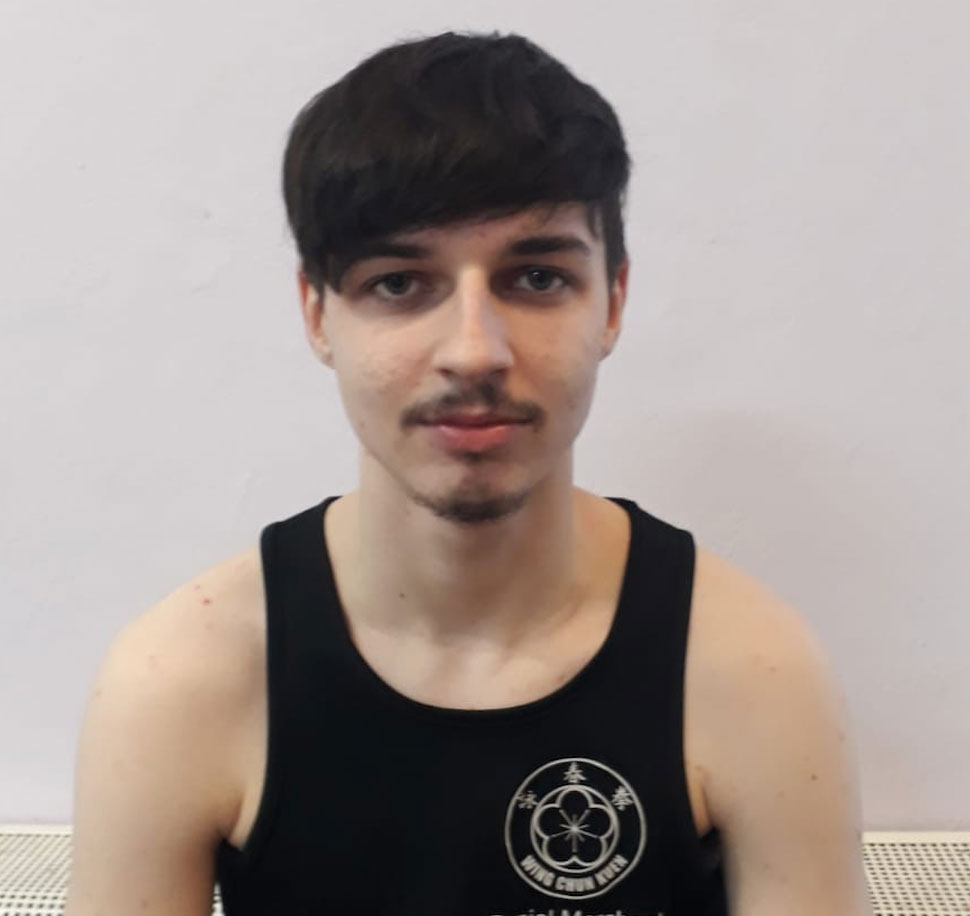 I began practicing Wing Chun in 2017 for the purpose of self-defence and wanting to better my mental attitude. After seeing how effective and truly understanding the simple yet complex art of Wing Chun I knew it was something that should be taught and shared with as many as possible.

This is why when I was offered the opportunity to be an Assistant Instructor at WCKUK Coulsdon and South Norwood’s kid's classes I took the offer as quickly as possible. Wing Chun changed my life for the better and I hope to inspire others and give them the same inspiration I have training with Sifu Jason. 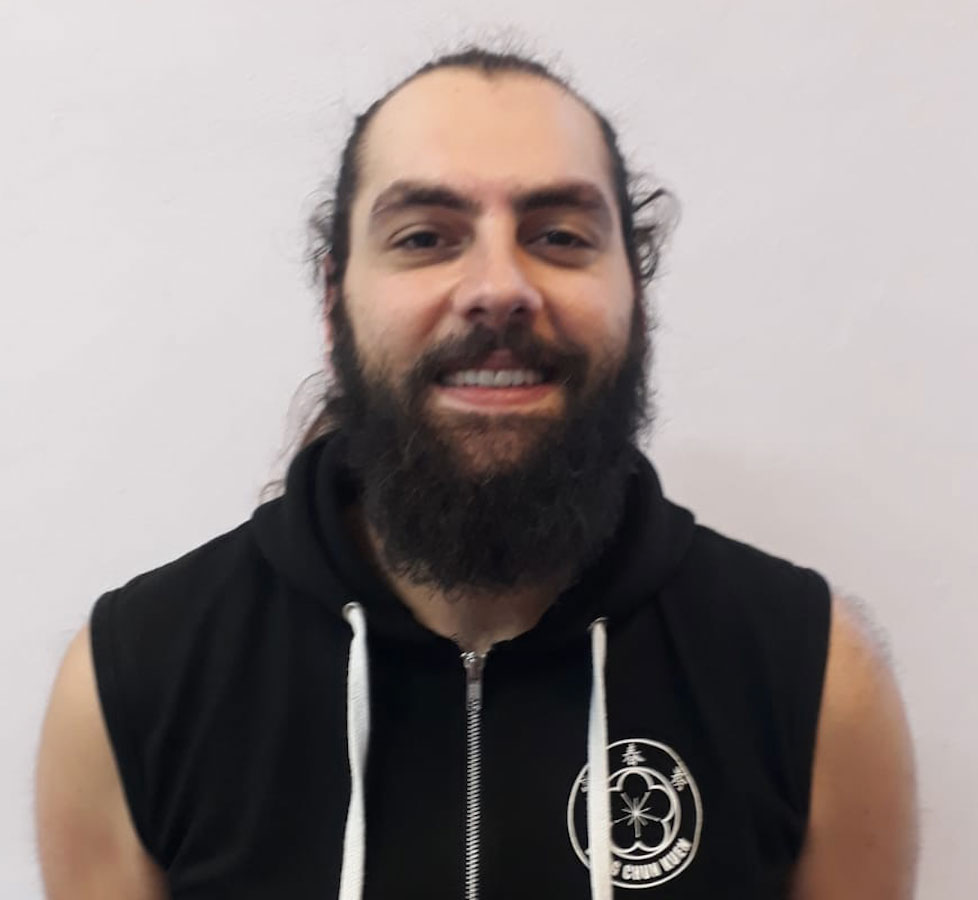 I wanted to take up Wing Chun for a long time ever since I had found out it was the foundation of Bruce Lee's martial arts. My wife and I decided to take up a couples activity over 2 years ago and with very little persuasion we found our way into Sifu Jason Ludwig's WCKUK classes.

From day 1 I knew this would be a passion of mine for the rest of my life. Wing Chun is such an intoxicating martial that is only helped by the ego free environment Sifu Jason and WCKUK have created. Sifu Jason and WCKUK have knowledge about the system second to none while learning this amazing skill you are always able to question what you are doing, receiving an answer to suit you and showing the practicality of any particular movement\shape.

Joining the assistant instructor's team is a great honour. I love imparting the skills and knowledge I am gaining through my own training on others and look forward to doing it for a very long time to come.

If you are looking for something new to do, Wing Chun with WCKUK is the answer. Everyone takes a martial art for different reasons not always for fighting
Join WCKUK. 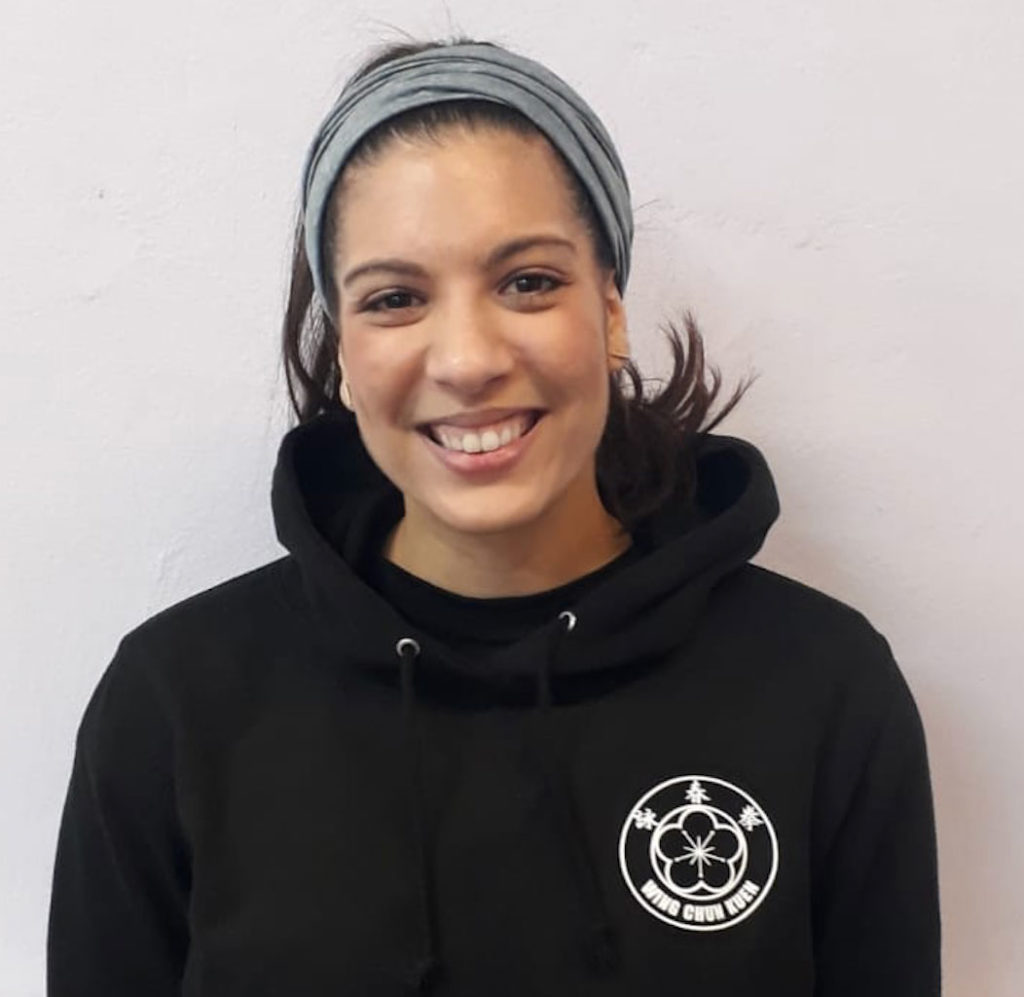 Wing Chun was first introduced to me by my husband Ben, he had been interested in martial arts for years watching various movies growing up and eventually becoming obsessed with wanting to learn Wing Chun. After years of talking about it, I found a class nearby that he could finally get involved with and try out together (also so I could understand what the fuss was about). Sifu Jason Ludwig at the South Norwood WCKUK class shows so much passion for Wing Chun it's contagious and after the 1st class, I was hooked!!

Being a physiotherapist I have always had an interest in learning about the body and Wing Chun allows me to explore that even further. WCKUK understands each individual's unique differences and builds on them to make them a strength. I am certainly not the fastest, strongest or tallest person but with Wing Chun, I am learning to use my body to become this and more.

I have enjoyed learning the intricate skills involved with Wing Chun and since becoming an Assistant Instructor I have been able to learn these details on a deeper level by teaching others. Wing Chun is truly is an art and something I can't wait to keep teaching and learning in years to come. 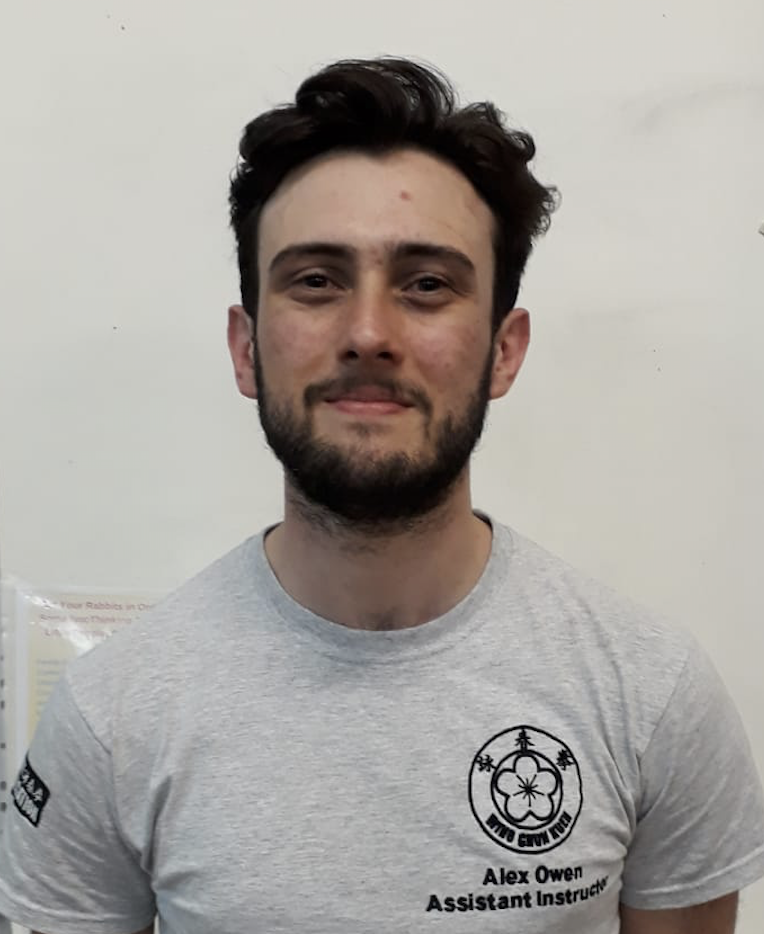 When I was growing up, I was never interested in learning any martial arts and had very little exposure to it. It was not until my early 20s that I made the decision that I wanted to learn a martial art to better my self-defence, working in a policing-based career. The choices available to me of various martial arts, lineages and schools made this quite daunting, however I had to start somewhere and began looking around my local area at Wing Chun classes.

I tried out some classes in Surrey and Croydon areas, however they all seemed to be very robotic in their approach to training and didn’t feel right, so chose not to pursue them. I then discovered WCKUK Organisation around 2015 and contacted Sifu Jason Ludwig to arrange my free trial lesson. This turned out to be one of my greatest decisions in my life, and quickly discovered that WCKUK’s approach to teaching Wing Chun was the most suited to me.

What started off as a casual hobby has increasingly become a core part of my life whilst training under Sifu Jason Ludwig, and now I train multiple classes per week and also take private lessons to progress my training.

In 2019 I have become an Assistant Instructor for WCKUK Kids in Coulsdon and South Norwood under Sifu Ludwig and am loving every minute of this opportunity. Now I have discovered my passion for training and teaching in Wing Chun, my long-term aspiration is to become a Sifu within WCKUK Organisation.